It is often said about New Yorkers that we don't know our neighbors. For the most part, this may be true, but not necessarily if you live in Brooklyn. I was recently strolling down Franklin Avenue in my Greenpoint neighborhood and met the wonderful people behind Hayden-Harnett, the best boutique (and coolest shopping) that Brooklyn has to offer. Just weeks later, I found myself appearing in their fall newsletter called "IRL" which stands for In Real Life. 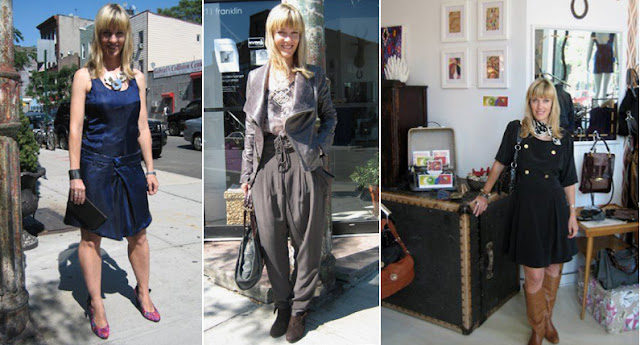 The concept of my task was simple: choose some outfits and explain why I selected them. I felt like Cinderella at the ball! I shared the page with Anne Sage of San Francisco, a woman with great style who is also behind the blog, The City Sage and co founder of Rue Magazine. Together, we "creative blondes" picked some very stylish ensembles! Above, are three of my favorite looks that I chose from Hayden-Harnett's new fall line. I don't want to spoil all the fun though, so check out the full newsletter here. 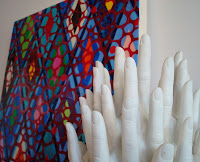 ﻿
There's another part to this story- Hayden-Harnett's Brooklyn store also has some of my artwork featured with a kick-off that started with a party celebrating New York Fashion Week's FNO (Fashion's Night Out). 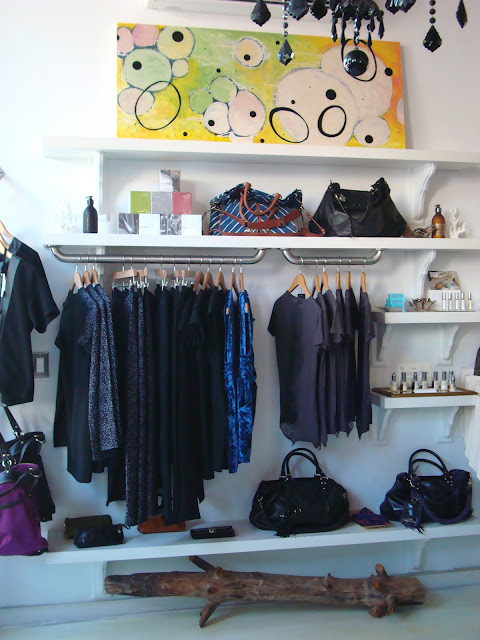 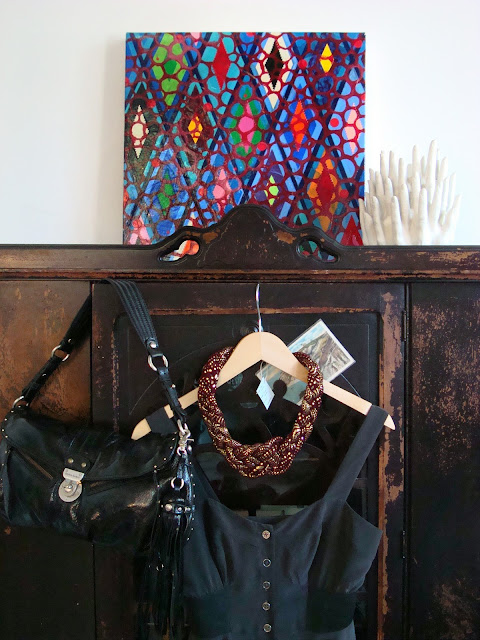 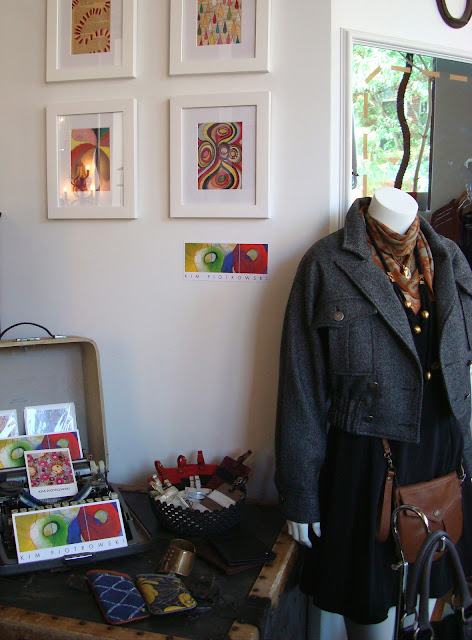 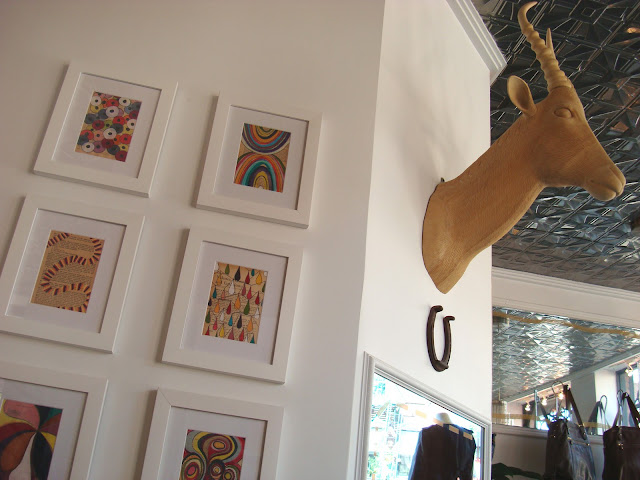 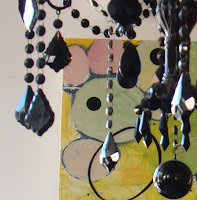 Strange Fruit - Not Your Average Pumpkin

You might think by these photos that I've been playing around in Photoshop. Not so. Don't adjust your screen either. I recently saw these most unusual heirloom pumpkins. Some had stripes, others looked like they had warts all over them. Still others were blue, grey, white, and (at the bottom) pink with what looks like stem growth that's gone awry. 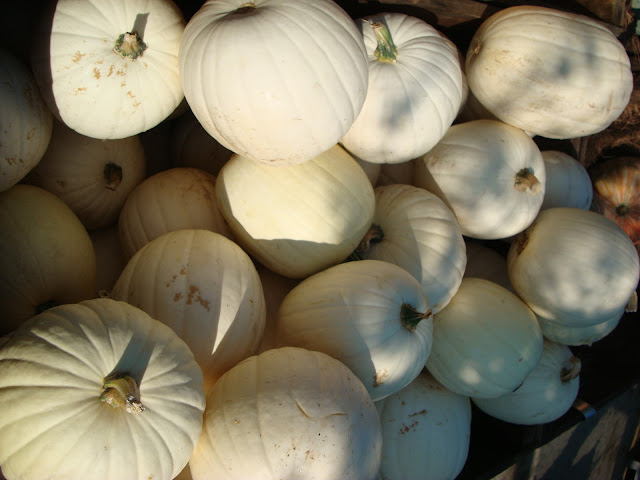 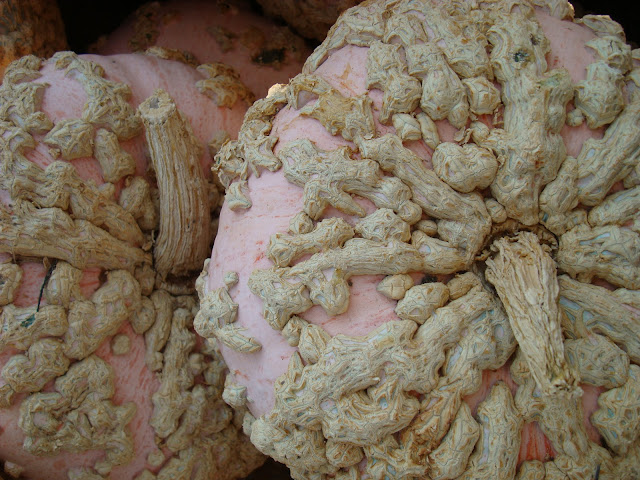 These are called Peanut Pumpkins.
With such bizarre looks, the squashes pictured here are sure to scare any Trick-or-Treater that comes to your door!
No comments:

Back in the late 1970s, I remember having an artsy toy called Fashion Plates. It amused me for hours especially on rainy weekends. But somewhere around the high school era, I must have gotten rid of it. After seeing a set as I was browsing eBay one day, I became obsessed. I needed to find them again! I cleaned my apartment, my old room at my parent's house, the attic, the basement- everywhere. After turning everyting upside down, I decided to just get it online. 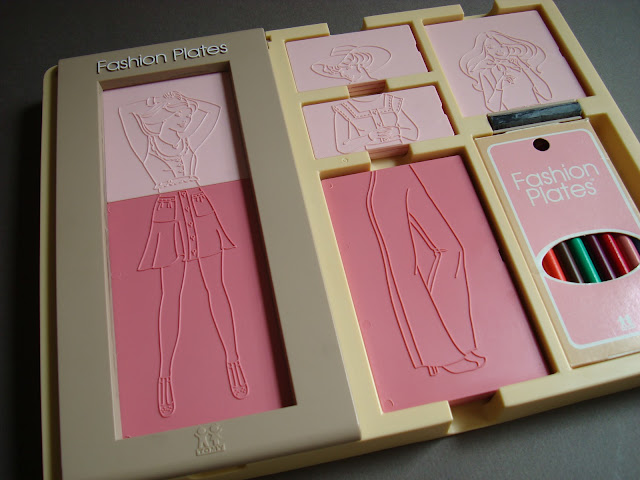 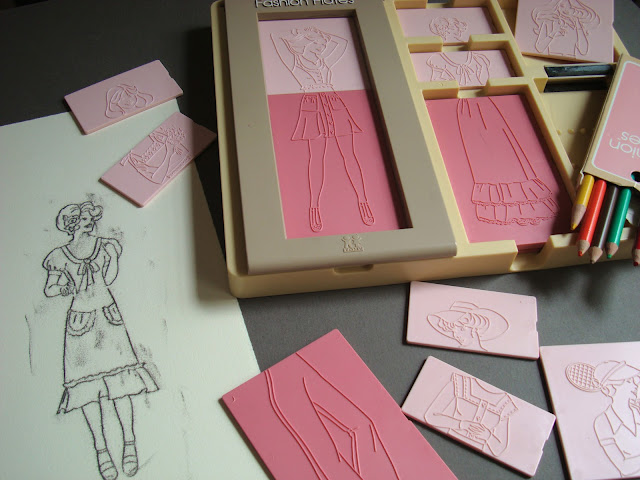 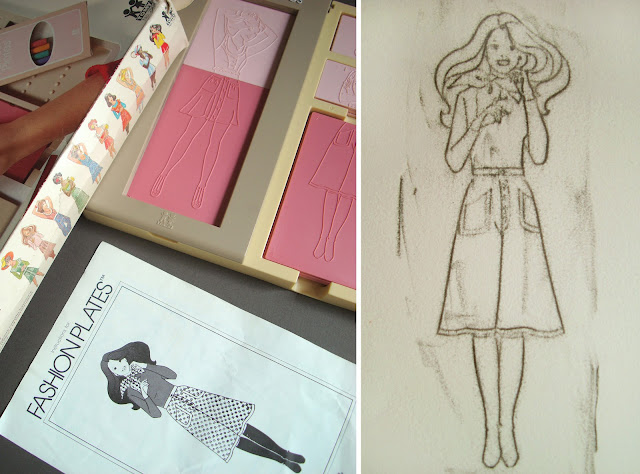 When it arrived, I opened the box, and the memories came flooding back - it became a very emotional moment significant of time that has passed, and my love for being creative. 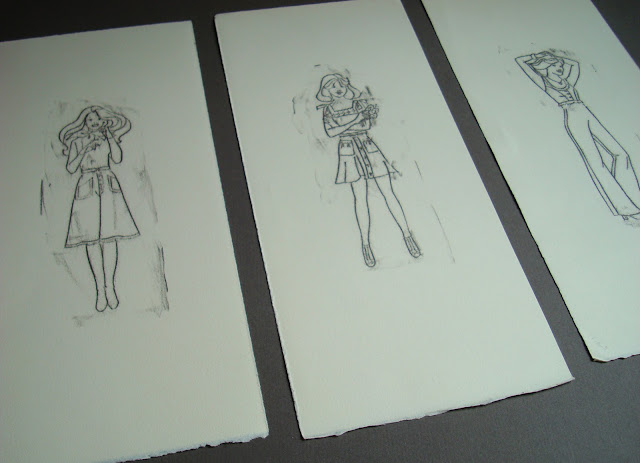 I dug out some scrap soft printmaking paper and immediately went to work.

I love the results- they look like kitschy charcoal drawings, but the kitsch factor makes me feel like I'm 10 years old again. 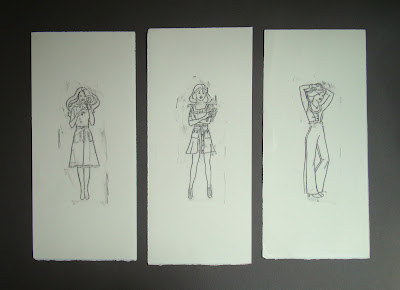 Another September 11th anniversary has come and gone and my thoughts are with the families who lost someone nine years ago. I remember that it was a pristine morning, and I was on my way to work. Across the river in Brooklyn, I could see a giant plume of smoke from the bus and thought it was merely an office fire out of control- another typical day in New York. 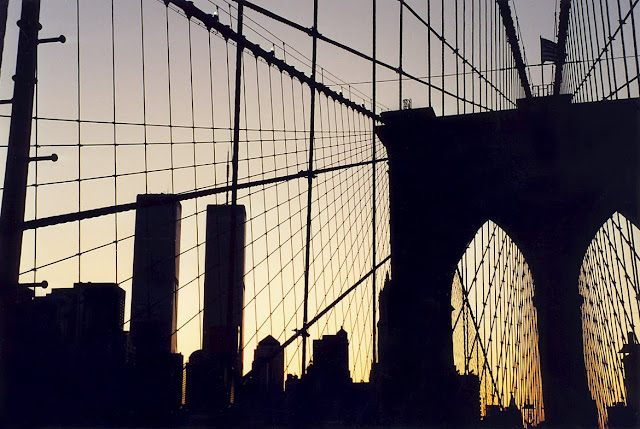 When I got to West 14th Street, I immediately sensed something was very wrong. Emergency vehicles were speeding downtown the wrong way on a one-way street. Everyone was standing outside looking up at the sky. Throughout the morning, I was glued to the television with colleagues and we watched in horror and disbelief as the Towers fell one after the other. We later ran outside to peer down the Westside Highway to see for ourselves.

I couldn't wait to get home and feel safe and invisible within the confines of my Brooklyn apartment. The short subway ride back to the outer boroughs was interminable. People appeared to be stunned and confused. They were both timid and polite; two words that would otherwise never describe commuters underground. We were all milling around aimlessly, suspended in time waiting for whatever might happen next. Battling my own confusion, I volunteered on the overnight shift at Nino's, a local family restaurant that generously closed its business to the public and served only rescue workers for months; anything to feel useful and connected. It helped for a little while but my relief was only temporary.

I remember that day in September as if it were yesterday. What do you remember?
No comments:

There was an old lady who lived in a shoe.....not so in Hallam, Pennsylvania. By mid-morning, we left Lancaster, PA and drove west on the Lincoln Highway. We were racing towards Braddock to make daylight, and came across the Haines Shoe House. 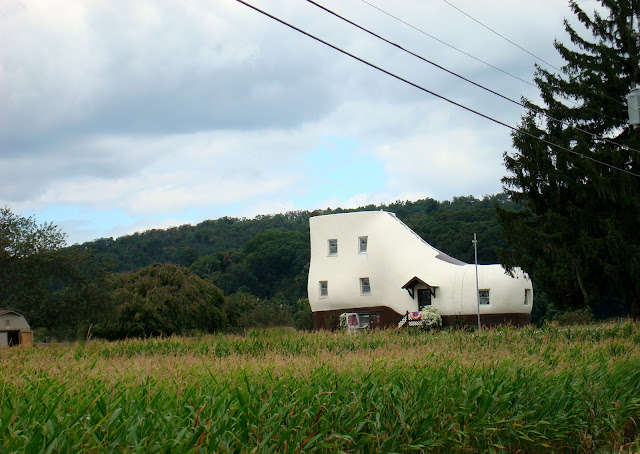 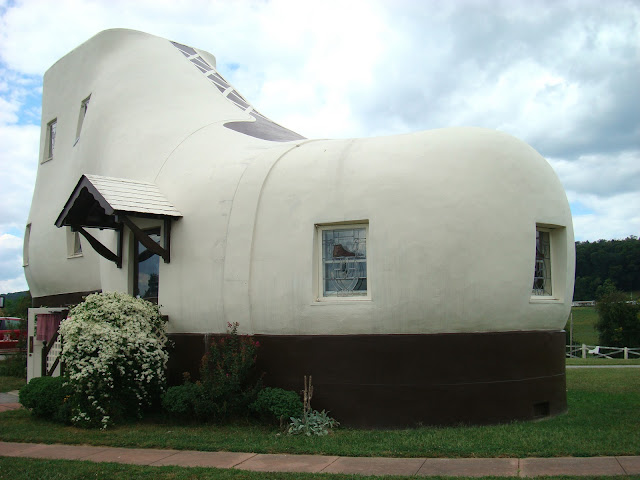 It was built in 1948 as a 5-story, larger-than-life advertisement, and was once rented to young newlywed couples. 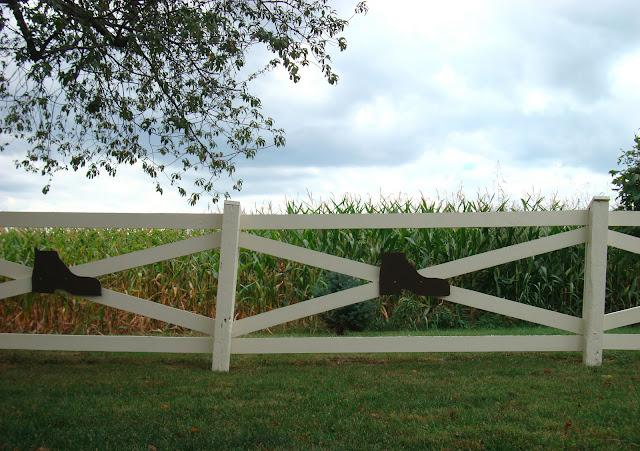 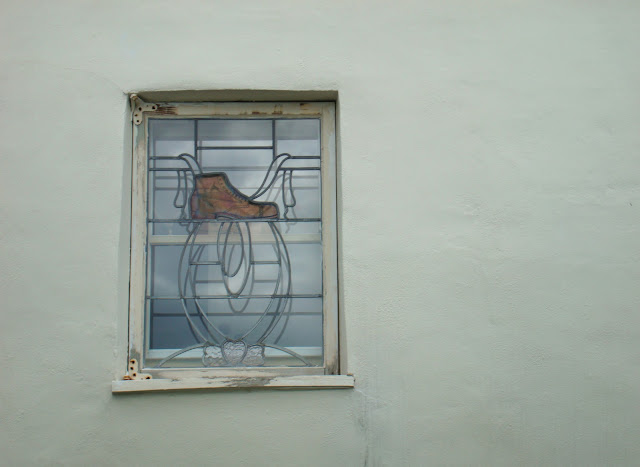 Shoes, shoes, everywhere!
We went on a tour, and there are hundreds more on the inside too. 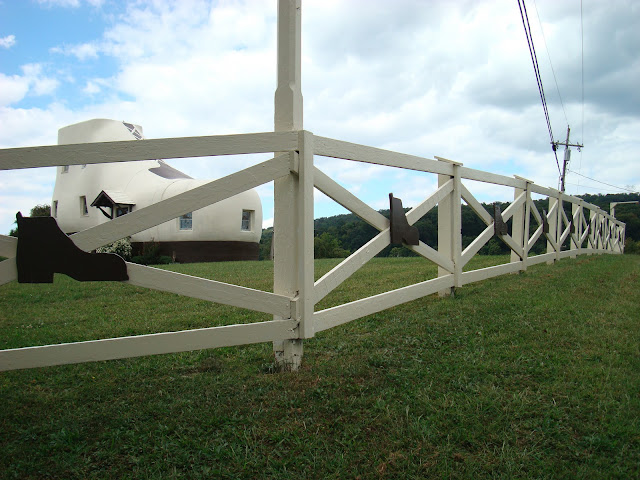 We love a good quirky roadside oddity. Here, we stopped for ice cream and a leg stretch as we headed further west. Stay tuned for the next leg of the tour!
No comments:

What I Did On My Summer Vacation (Part 1) - Fallingwater

My cousin and I like to take unusual road trips. For the last weekend of summer, you won't find us lounging on a beach with an umbrella in our drinks, you'll find us in Pittsburgh. Yes, Pittsburgh. This excursion was prompted by an intriguing news story about the revitalization of an old rundown steel town in the "Rust Belt" called Braddock. While we were checking out Braddock, we worked in some other must-see sights.
____
I'm going to start my summer vacation series of posts with the highlight. It was our very last stop before heading back on the road for the long drive back to New York - Frank Lloyd Wright's masterpiece, Fallingwater, located in the lush woods of rural Pennsylvania. 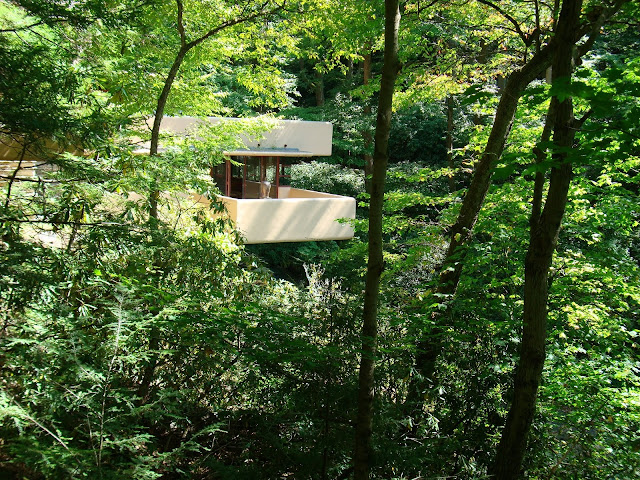 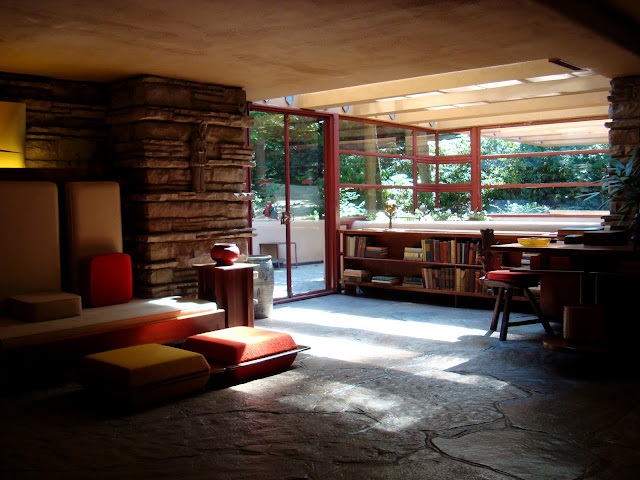 The house is chock full of artwork by Tiffany, Picasso, and Diego Rivera with neutral coloring throughout. I captured the feeling straight from the era of the popular tv show, Mad Men. Using rock from the area, this feat of architectural engineering is truly in harmony with nature. Cantilevered platforms delicately straddle a waterfall, and evokes the feeling of an exquisite treehouse suspended high in the branches.

Every room extends an invitation to occupants to relax and settle in with a good book on the terrace or curled up by the fire. I can just imagine that the fall season would be spectacular here. While exploring this home, I couldn't help but wonder what it would take to move into a place like this. 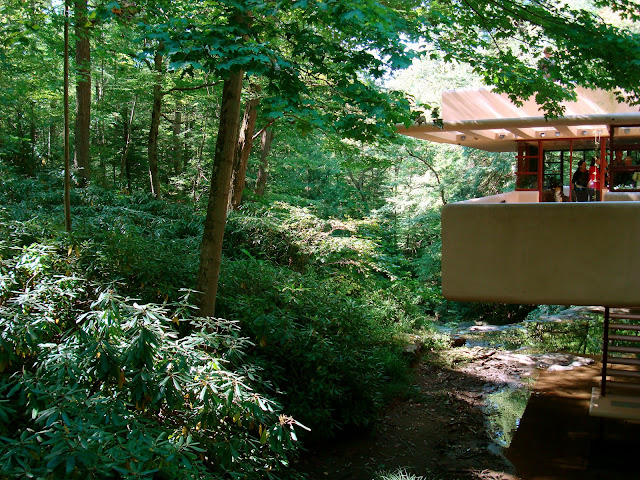 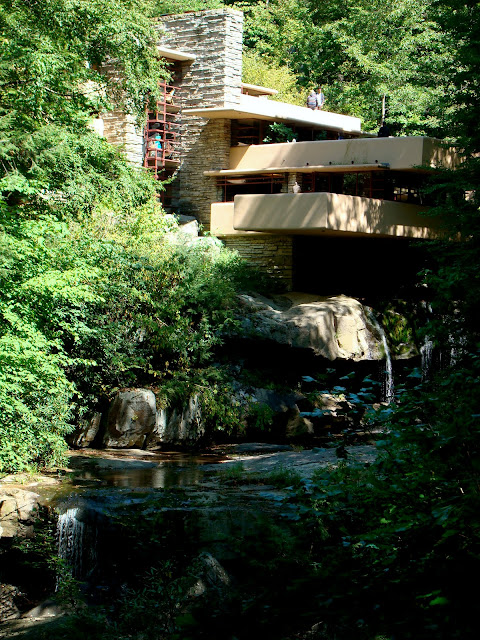 The punchline: when it was built in the 1930s, the home cost the Kaufmann family approximately $155K. Today, the collection of artwork alone in this one of a kind dwelling is priceless.
No comments:

Many thanks to Rainboeliza who has discovered my work on Etsy.
She describes a little bit of my painting process relating it to her own work. 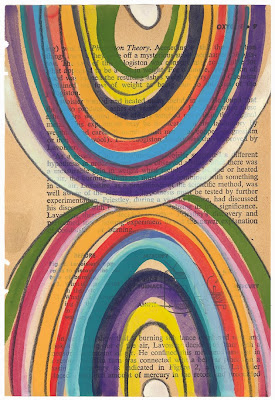 More of the nice piece written about my work can be found here.
No comments: