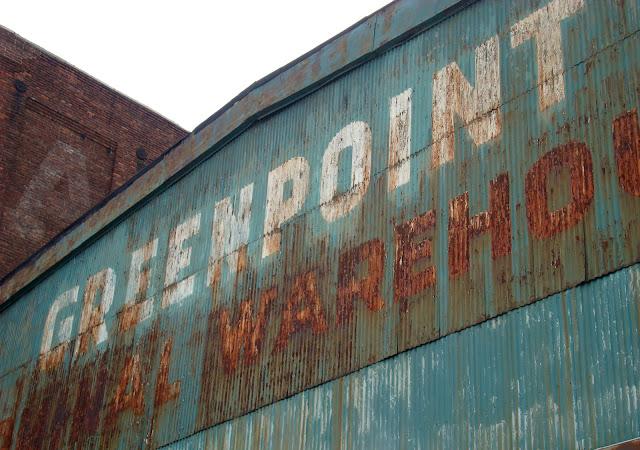 After ten plus years, I'm leaving Greenpoint. "They'll have to carry me out of here kicking and screaming," I thought when first confronted with the idea. It would mean giving up my rent-stabilized lease. It would also mean giving up part of an identity that I had culled for years; that certain stigma that comes with living in an up-and-coming neighborhood teeming with artists and creative types. When I moved to this section of Brooklyn back in 2000, no one (and I mean no one) wanted to live here. It was industrial, run-down, and fairly unattractive, even for New York. About six months later, the world discovered Williamsburg which is practically right next door. Since then, the spillover of Williamsburg Cool has made Greenpoint one of the hippest neighborhoods in Brooklyn but maybe a little too hip for me of late. I will miss the palpable creativity, the new wave of culinary artisans, the grit, the arms and legs (among other parts) covered in tattoos, and the old Polish couples who remind me of my own grandparents. 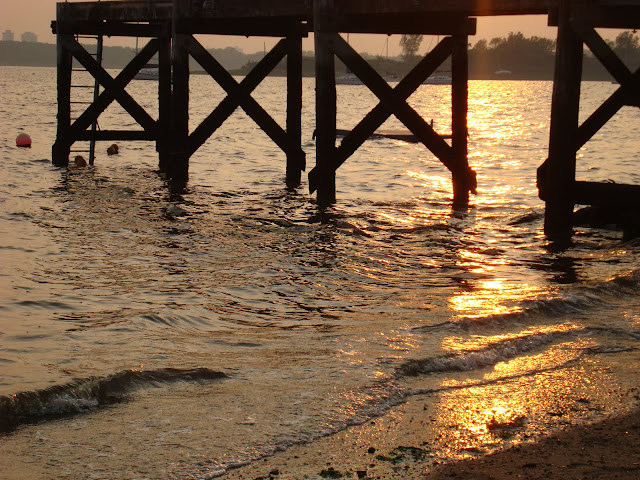 I'll be trading in pierogies and the rust belt of Brooklyn's waterfront niche for a complete change of pace, peeky-toe crab sandwiches, and the sailboats of a small seaside community in the Bronx. After a short weekend jaunt  to City Island last year, I would have never guessed that I would be moving there exactly one year later. After counting down the days, I am looking forward to starting my new life by the bay....private beach and all. And, just in case I forget where I am for a second, the outline of the Empire State Building serves as a gentle reminder looming on the watery horizon. 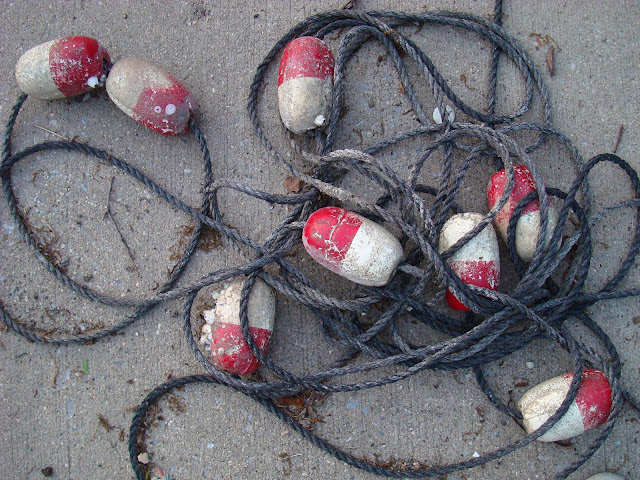 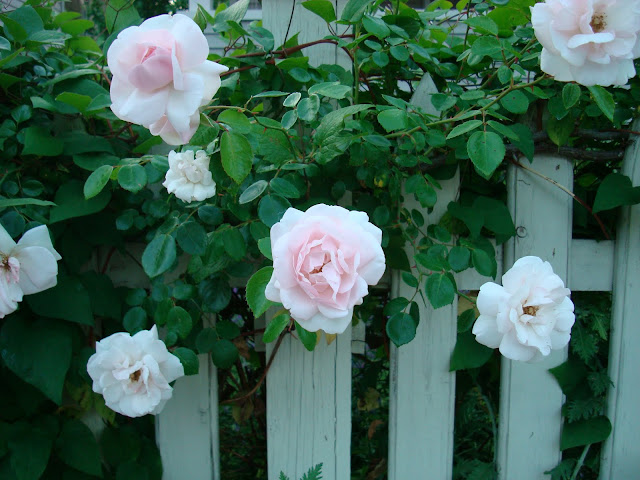 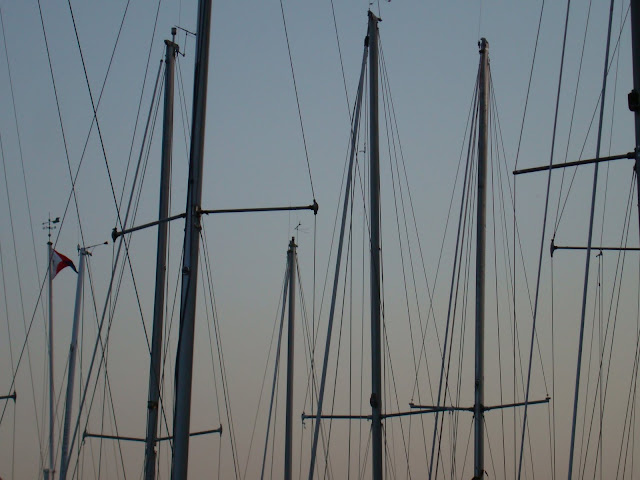 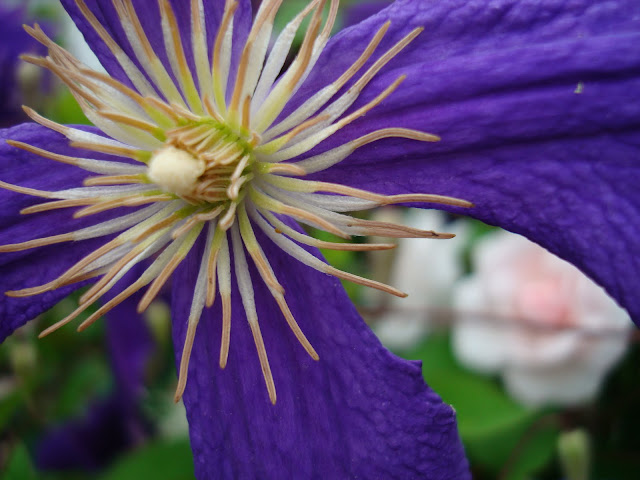 Judging by the billboards and posters plastered all over New York City lately, the world is slated to end on Saturday by someone's calculation. Personally, I am skeptical- they've been wrong many times before. Other signs are much more subtle.  I often say here that the streets of New York can be like taking in an unplanned visit to an art museum. As I walk through these alleys of concrete, I wonder what's on the mind of the people who create unsolicited artwork and put them out there for the world to see without formality. What prompts artists to display their work in this way or create it at all? What are they reacting to? What are they trying to say? It's a message of sorts crafted by a visual courier- you just have to be aware to pick up on the signals. 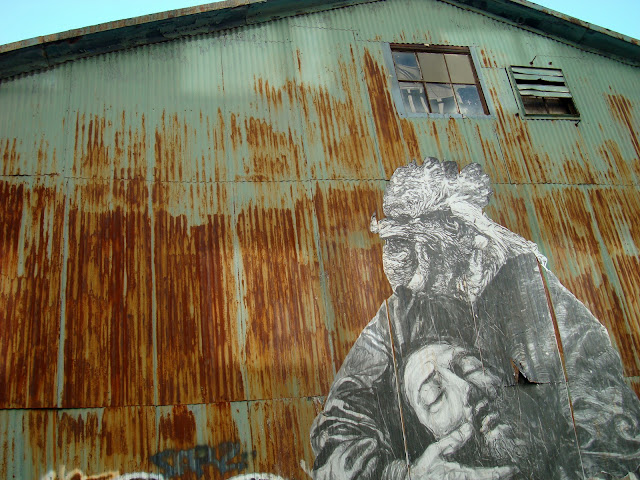 St. John, Williamsburg Warehouse, Brooklyn (February 6, 2011)
This larger-than-life sized paste-up by Gaia confronts its viewers suddenly and unapologetically. A giant rooster head is morphed with a robed human body as the figure cradles the severed head of St. John the Baptist, known as the messenger of his time. This piece is a variation of another by the artist called, "Deny Me Three Times" (below). Gaia is known well for renderings of animal and human figures that pop up on the sides of buildings and throughout the streets of Baltimore, New York, San Francisco, and Korea but here, the artist is looking towards the museum-like work of the old masters like Caravaggio, Guido Reni, Bosch, and Bruegel. Rich with meaning, the rooster is known in symbology as an instrument that promotes watchfulness and foretells the end of the world. Combined with the imagery of the prophet, it is a powerful work of art.
_____
In a time consumed by war and environmental concerns, there is obviously an omen being conveyed in these works. Is it some sort of prophecy for the modern age? Or a call to action concerning some tragedy before it occurs? Whether your opinion of art found in the streets is lowbrow or highbrow, Gaia cleverly entwines elements from both worlds here- a timely reminder for us to listen and watch for the signs of possible things to come. 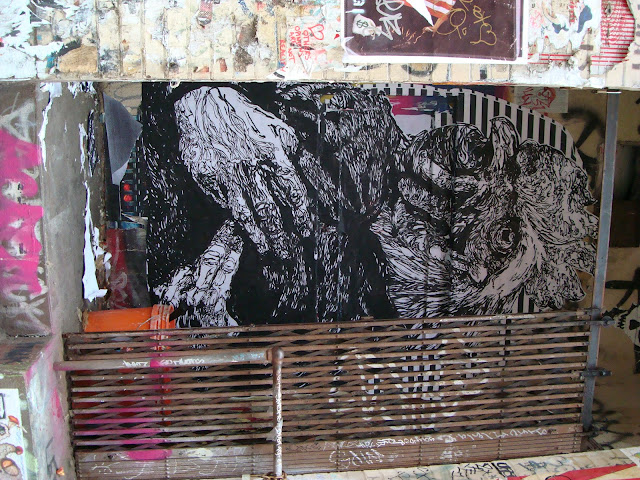 Deny Me Three Times, SoHo Neighborhood of Manhattan (May 30, 2010)
No comments: 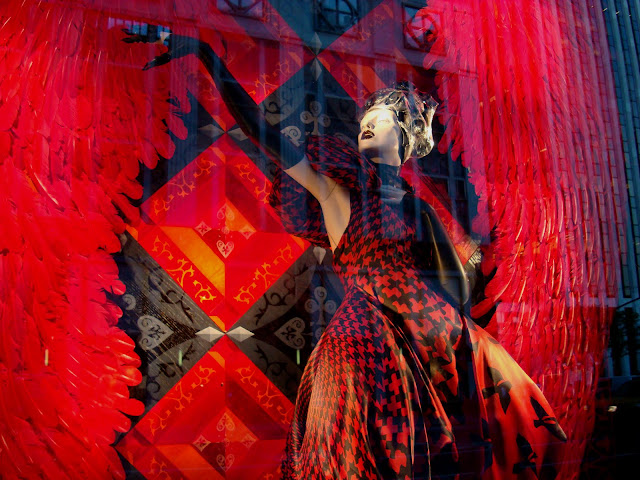 ....or at least his legacy. The late Alexander McQueen's risk-taking creations will be on display at the Metropolitan Museum of Art through July 31st. In conjunction with the Met's Savage Beauty exhibit, Bergdorf's also has a collection by the troubled genius featured in its windows. 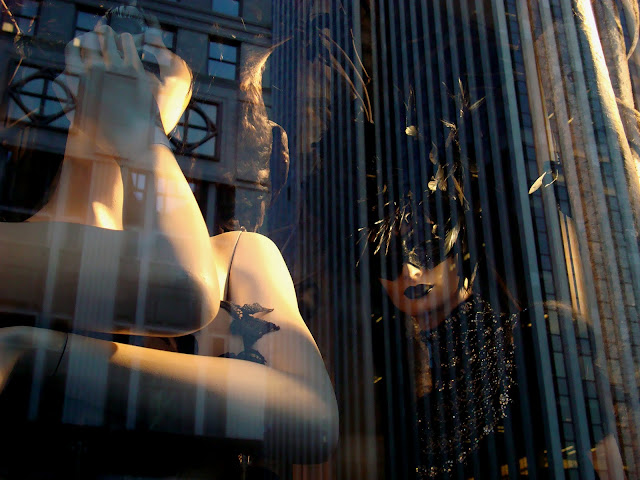 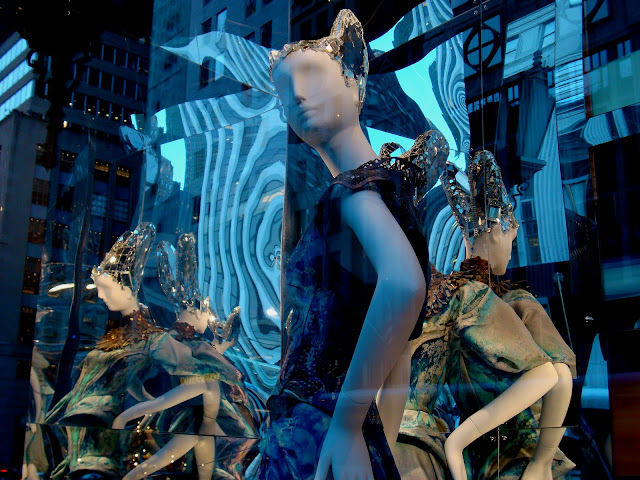 Goth-looking mannequins peek out from behind the birch trees of a dark forest. A billowy red dress updates Alice in Wonderland's Queen of Hearts under the protective wings of a stunning giant, red eagle. And the horned trio frolicks in the moiré patterns and reflections of the funhouse mirrors. 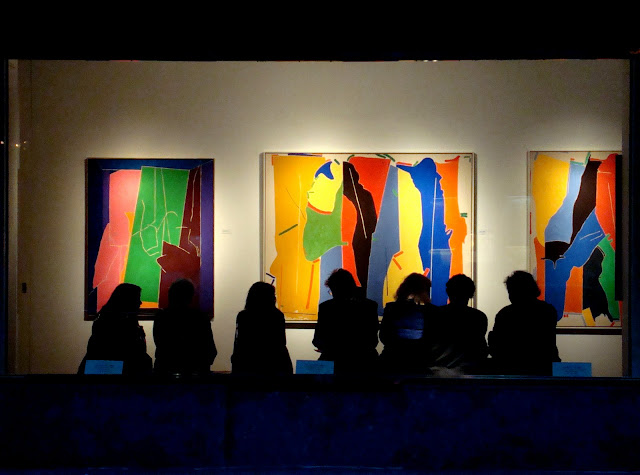 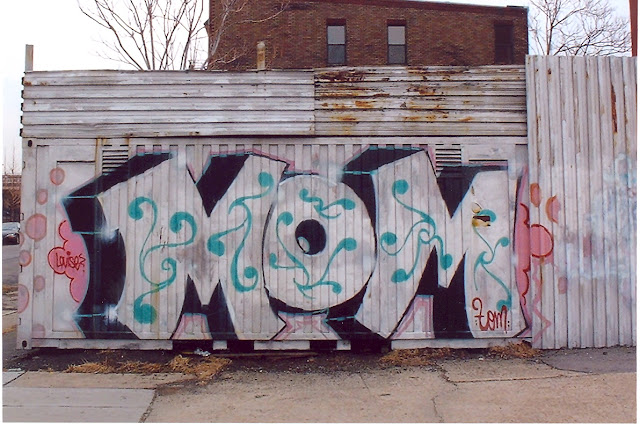 February 2, 2001 (McCarren Park, Brooklyn)
Don't forget to give her a call today!
No comments: