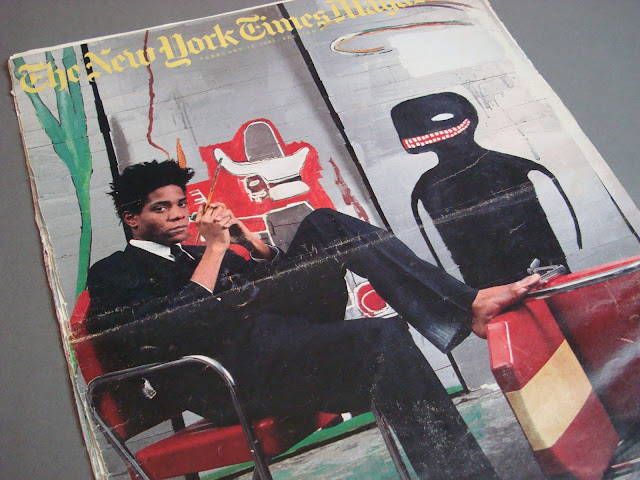 This post commemorates a small anniversary. This article with the cover picture above, New Art, New Money: The Marketing of an American Artist from the New York Times 28 years ago (yes, 1985!) marked a defining moment in the New York art scene. If you love the paintings of Jean-Michel Basquiat as much as I do, then this photo by Lizzie Himmel showing Basquiat sitting pretty is probably very familiar to you. After moving several times, I feared that this memorable relic may have gotten lost or inadvertently tossed out. Having recently gotten my hands on it again, I have it hung prominently in my work area for painting (and blogging) inspiration. A special frame is coming soon. 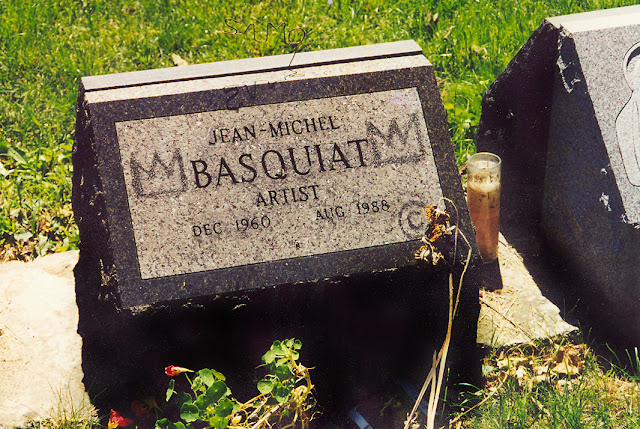 I re-read the article to get a sense of the mindset of the art world in those days. The New York scene has changed so much since then. Many of the people and places are now gone. It chronicles the art market, changes in the players, the nightlife, and collector habits from the era of the Abstract Expressionists to the mid-1980s. The art stars were different then. Behind-the-scenes painters like Pollock and DeKooning were transformed into superstar personalities like Warhol and Haring. Popular artist venues like the Cedar Tavern were converted to the Mudd Club and Mr. Chow's. The article further describes rise and fall of painting in a booming art market. Everyone was becoming a collector. Surprisingly, artists often had waiting lists for their work.

Basquiat was at the top of his short-lived career at the age of twenty-five. He was also a victim of his own talent and success; unsure of how to handle the grooming and attention of art world heavyweights, meteoric success, and unbelievable sums of money in such a very short period of time. Just five years prior, he was couch surfing and couldn't even buy his own art supplies. Suddenly his work was hanging in the homes of celebrities, collectors, and notable museums next to the previous generation of blue chip artists. Now, he was easily getting $10,000 - $25,000 for his paintings but he didn't even have a bank account. He suddenly had context in the art machine, people took advantage, and drugs eventually took their toll.

Basquiat is buried in Brooklyn's Green-Wood Cemetery (Plot: Section 176, Lot 44603) along with other famous creative residents such as Louis Comfort Tiffany and Leonard Bernstein. A thin wire frame that reads "SAMO©" sticks out of the top of the headstone. This was Basquiat's graffiti tag and alter ego that once covered a crime-ridden city, and also appeared in many of his paintings. He described it as "same old" in the form of a corporate logo. The irony is that he didn't have the street credibility of most graffiti artists (spray painting train cars at night) and his own paintings exhibited more of a formal (art historical-based) aesthetic with references to the mark-making of Cy Twombly, Dubuffet, and even the educated but raw primitivism of Picasso. Today, Basquiat's paintings sell for well over a million dollars - if you can even get access to one.

"Bold color and the sensuality of a richly painted surface returned, appealing to an art public that had been starved, baffled or bored for a decade." Gone are the glory days of the New York art world. Artists having household names is practically nonexistent these days. Personally, in this digital age, there appears to be a deep lull. I can only hope for a revival of painting and a resurgence in the cycle of a meaningful art market.