Ok, we never really left the city. Believe it or not, this is the Bronx. When my mom comes to visit me, we often get together with my cousin and have a "girls' weekend" loaded with many activities. Amazingly, we've almost never repeated any of these activities. A few weeks ago, before the beaches were officially open, we welcomed an early summer with a short jaunt to City Island and Orchard Beach. This area consists of a small peninsula just beyond Co-Op City. The air was surprisingly fresh and cool. It had the brine-y fish scent of the ocean and city smells no longer invaded my nostrils. You feel like you're thousands of miles away, but somehow, you can still see the spires of the city off in the distance.

We drove around for a while taking in the beautiful scenery, the aroma of someone cooking garlic shrimp wafting through the marinas, and dreaming about having our own cottage so close to Manhattan; the best of both worlds. After some ice cream, we then saw the very enjoyable movie of the same name which was filmed around City Island (starring Andy Garcia and Juliana Margulies). I highly recommend it. Having been there earlier in that same day made the movie even more fun to watch. 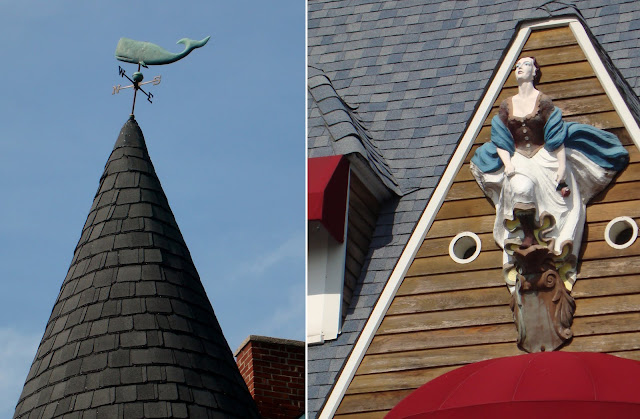 The film opens with the concept of the "clam digger" vs. the "mussel sucker". Translation: someone who's family has lived in the quaint fishing village for generations vs. someone who is just visiting and decides to settle down here. Despite the pejorative connotations, I can very easily see myself being the latter. 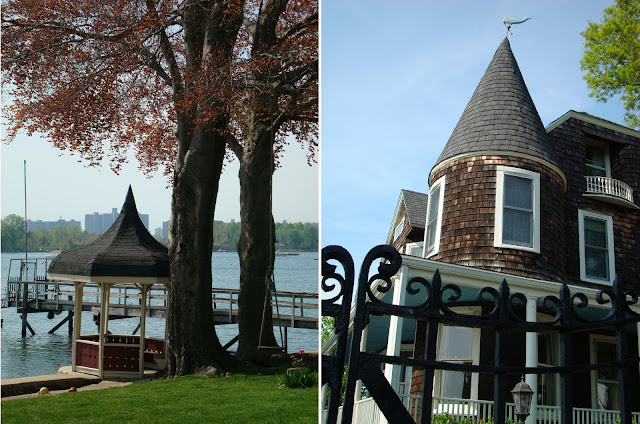 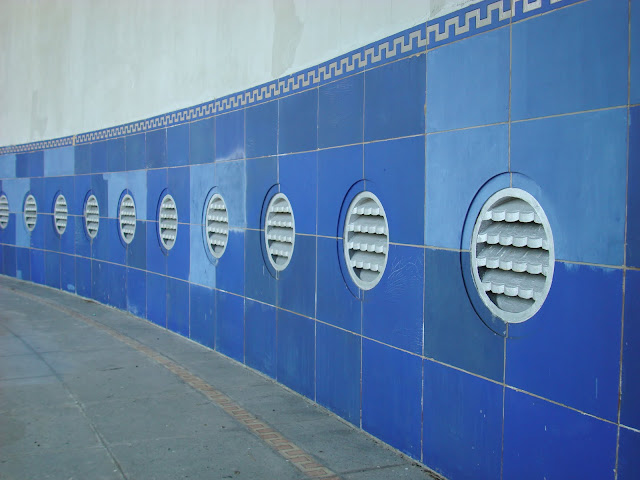 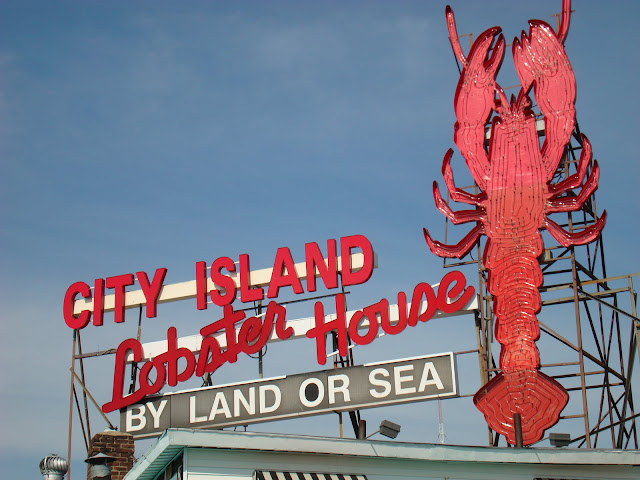 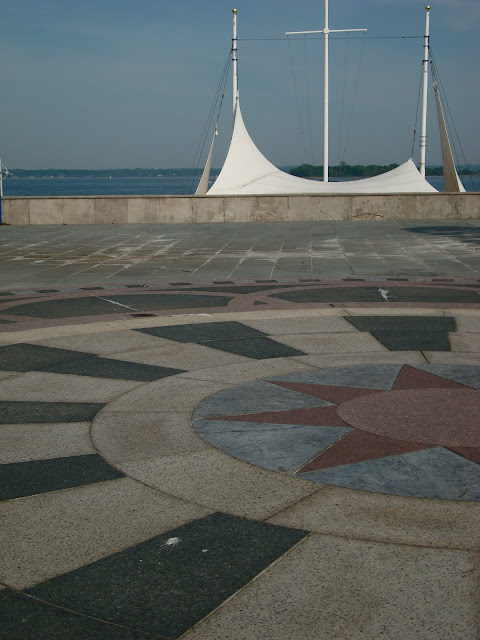 Have an enjoyable Memorial Day, everyone- and an official start to a great summer!
3 comments:

A Walk Around the Neighborhood - SoHo

After a particularly long week, I went to catch a matinee of the newly released Sex and the City 2 with a girlfriend to mindlessly drool over some clothes. I won't go into Samantha's gratuitous one-liners or the fact that there will be no Oscar for the screenplay, but we certainly did enjoy the fashion. After the movie, I still needed to go for a walk to get my mind off of some things and headed to the SoHo area of downtown to take some photos. 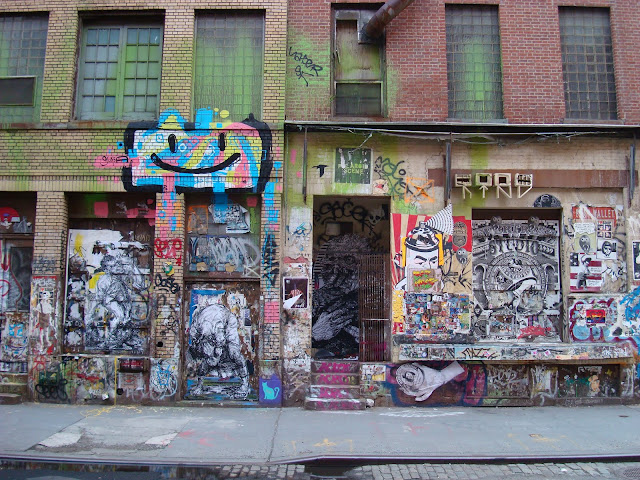 This is one of my favorite ever-changing walls in the city. There's something new here just about everyday. I haven't been here in a while and enjoyed taking in what's on the mind of the city's street artists. 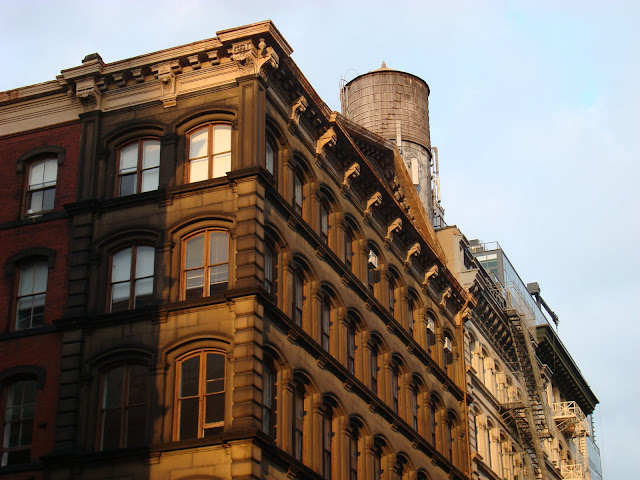 As the sun started to dip in the sky, and was walking down Crosby Street in search of some interesting wall pieces, when I ran into an interesting character instead- graff writer, Jaes. He was just coming from a job, and wondered if I just saw common friends of ours, the Plaztik duo. Coincidentally, they were right around the corner. 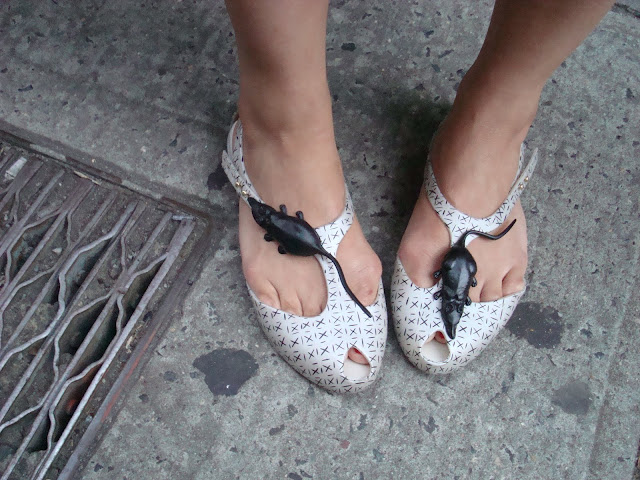 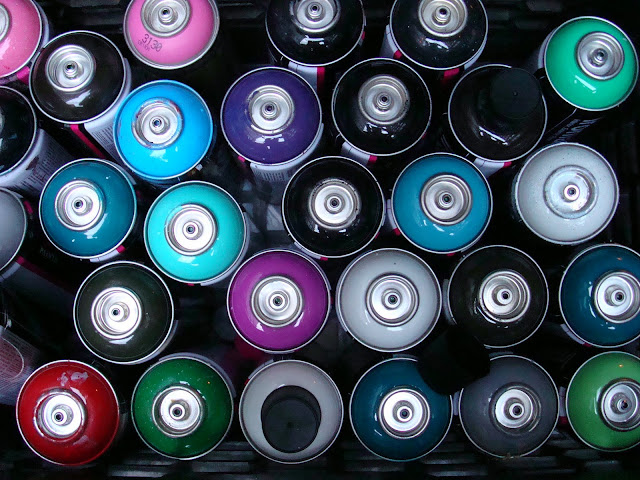 
We all decided to convene and relax at Plaztik's secondary space, affectionately called "the Lab" where we sipped strawberry-flavored vodka with lemon, ordered up some of the best pizza I've ever had (with truffle oil!), and watched stupidly funny movies. What better way to welcome in summer and the holiday weekend than an unplanned soiree with friends?

My work was featured by a home decor fan via the Honeybee blog based in Canada.
Check out the post here.
No comments:

Pickling 101 with the Experts - McClure's

A few weeks ago, my friend and I went back to the Brooklyn Kitchen and finally got to experience that pickle class that I mentioned some time ago. And I learned from the best- the very witty and entertaining, Bob McClure of McClure's Pickles. The McClure family business that originated from Detroit is now selling and making quite an impact in many places throughout the US, including New York. After all, they seem to be featured somewhere in the New York Times just about every two weeks! 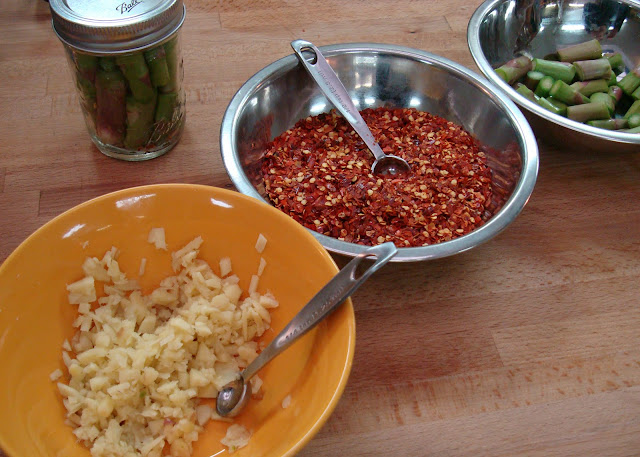 Once the class got started, I was in for a real surprise. That night, we would not be making actual cucumber pickles that we are accustomed to getting at diners and delis, but that "pickling" was the overall term for the process of preserving food, like canning (or making jam). In fact, pickling and canning are terms that seem to be used interchangeably, but one is not the other based on the preservative (brine/vinegar) and process (boiling/vacuum packing) used. Or something like that. I'm still not totally clear on the differences, as I was busy taking my photographs. 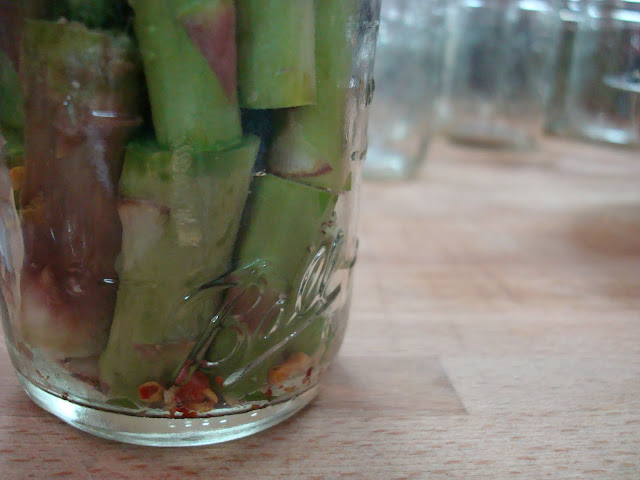 Tonight, we would be pickling fresh asparagus, and learned that it is of the utmost importance to use the best base product possible. In addition to our vinegar-y brine, we used ginger, black pepper, and red pepper flakes for flavoring. This process definitely appeals to the science nerd in me covering everything from pH levels, basic physics, natural vacuums, timing, and fending off the threat of harmful bacteria. 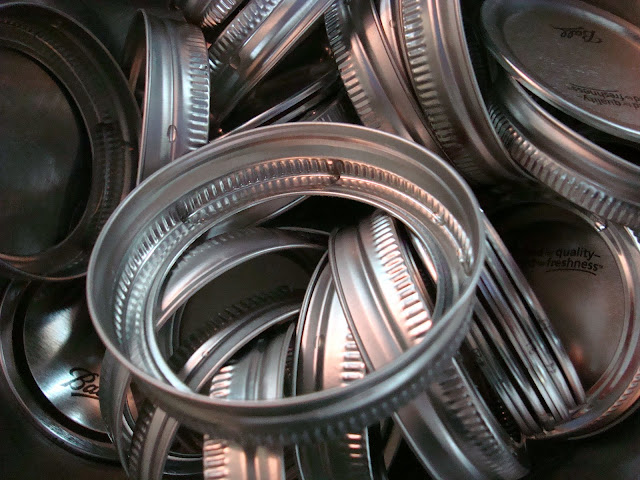 My friend Layla (also from focaccia class) and I thought this would be another fun and basic food activity. I think it's so interesting to learn these preservation processes that our grandparents did as second nature. They were able to get through rough winters after their garden yielded crops that could not be consumed in time through inventive ways of preserving food. With the advent of tv dinners and fast food, we've gotten away from such old school practices of a bygone era. What's old is new again! 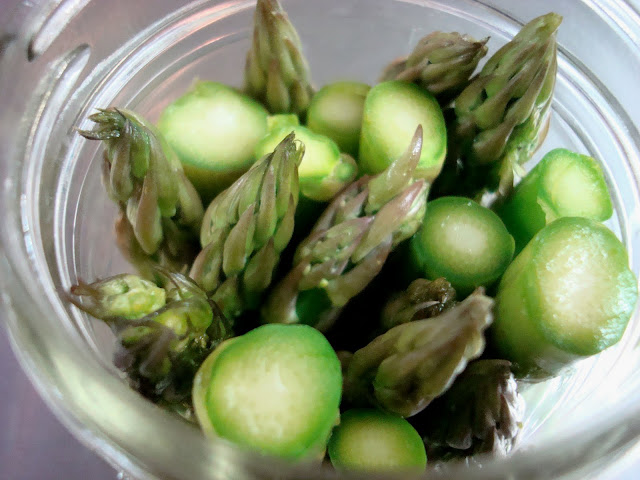 Stayed tuned for our next class which will probably be something simple like making carbonated beverages and natural sodas like rootbeer and sasparilla- I can't quite commit to the pig butchering class just yet. 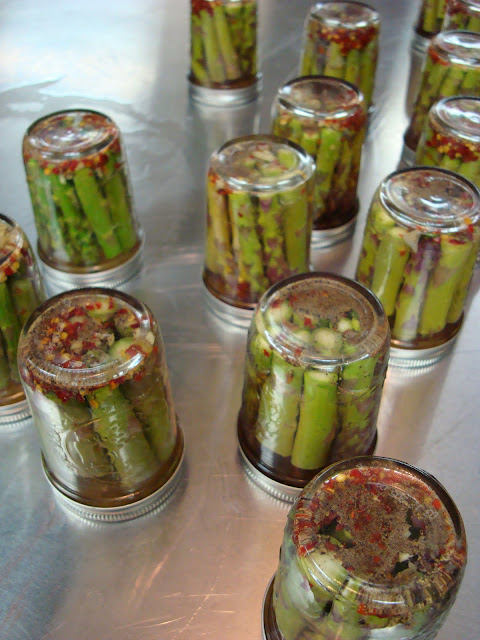 When you're walking down the streets of Manhattan, the shop windows on Fifth Avenue and Madison Avenue can be like mini art galleries with rotating exhibits. I happen to get a lot of inspiration from looking at these amazing storefronts. They are cleverly-executed, thematically-curated, often wild, and never boring.

Last week, I was strolling past Bergdorf's when some of the fashion in the windows stopped me in my tracks. I was drawn to one particular artsy-looking mannequin labeled "the Bohemian", and quickly gathered that the theme of the displays highlighted different archetypes of feminine style from the 1890s through to the 1940s leading up to the breezy modern American woman of today. The passer-by is taken through time with the Gibson Girl, the Suffragette, the screen siren, and the bohemian (marked by a female artist wearing high-waisted pants and a billowy blouse in her studio). The set of windows marked a fairly new fashion relationship between the costume departments of the Metropolitan Museum and the Brooklyn Museum with their first exhibit happening concurrently, American Woman: Fashioning a National Identity at the Metropolitan Museum of Art, and American High Style: Fashioning a National Collection at the Brooklyn Museum. I will definitely be checking out both of them. 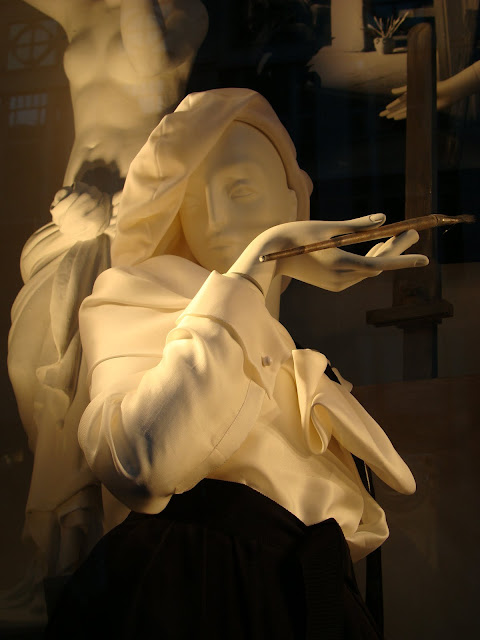 The description for the Bohemian (1900s) reads: "As an archetype, the bohemian represented the American womans' growing demand for greater freedom of personal expression. Like the Gibson Girl, she liberated women to venture into the public sphere, but instead of sports, she pursued the arts: from collecting art and patronizing artists, to organizing exhibitions and founding modern museums. The role of art in fostering self-epxression extended to the bohemian's self-presentation. She favored dramatic fashions that made bold statements, with garments influenced by the languages of classicism, medievalism, and Orientalism. The silhouette was looser-fitting, unfetterd, and uncorseted. This vision of dress reform free the American woman from sartorial convention and paved the way for greater personal development."
No comments:

Back in January, you may recall that I was nominated for an online award in the affordable arts category on Poppytalk. Starting tomorrow, I will once again be in the good company of other artists who were lucky enough to be selected to be included for the next Poppytalk Handmade Marketplace called, "Paper Pops". The theme for the next curated virtual market is anything paper and will be running through June 4th. I will be featuring my antique book page paintings. 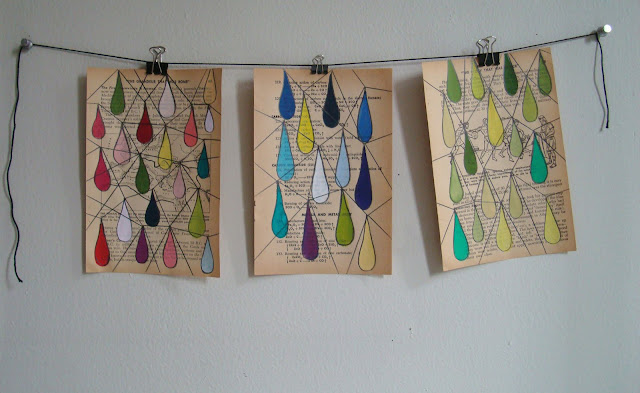 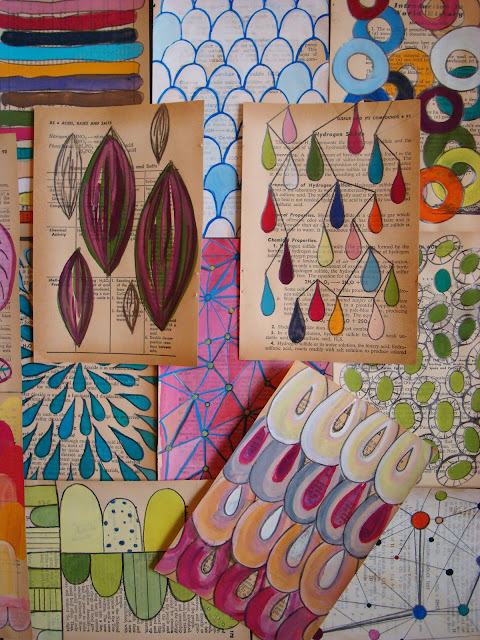 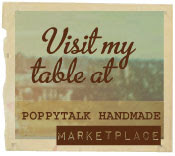 My favorite new blog, featuring all sorts of interesting things has featured my work among other scientific nerdiness! Check out the post here - "We've Got Chemistry"